We have made some great progress over the last few years. So far, together we have accomplished many things.

The list goes on but our work is not finished yet. I couldn’t be more proud to be your representative and your voice and would be honored to continue to serve Lakewood as I have.

So, I’m asking for your help in my re-election campaign. Give what you can. And join me as we continue to move Lakewood forward.

Thank you for your time and consideration,

I pledged to work toward a better Lakewood, for all, three years ago.

Issues of inclusion and equity are very much part of that. Active work to end racial disparities has been important to me for years.

Racism and racial disparities are real crises. This is why public health experts, who warn of the need to deal cautiously with COVID-19, have also been supportive of Black Lives Matter protests. Social equity and public health are inseparable issues.

Being proactive is the best approach to both. On June 15 I recommended review of Lakewood’s policing policies and several reforms, along with my at-large city council colleagues. These reforms reliably improve safety for communities, and for officers of departments which implement them. They can be an excellent beginning toward a safer and more just Lakewood for all.

I am grateful for Mayor George’s commitment to involve her entire administration in support of solutions. There’s much more to do, with public safety policies and with broader efforts for a welcoming, inclusive community.

END_OF_DOCUMENT_TOKEN_TO_BE_REPLACED 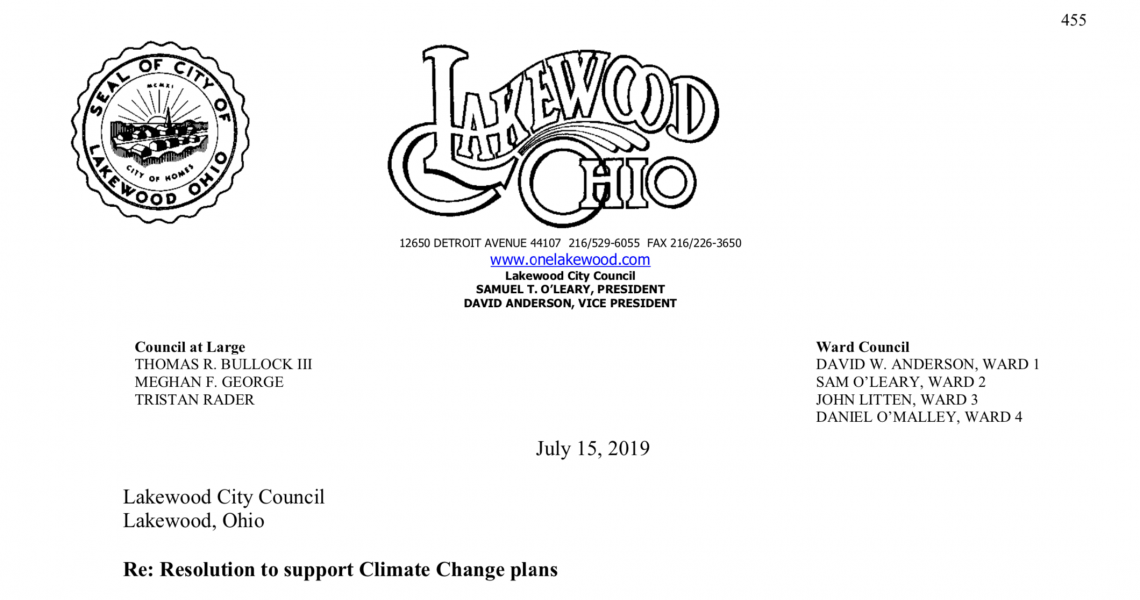 July 15th, 2019 – I’m very pleased to announce that tonight Lakewood City Council unanimously passed Resolution 9082-19 which supports two congressional bills: The New Green Deal (HR109) & The Cardon Fee and Dividend (HR763) as well as the BlueGreen Alliance. In addition, we committed to working towards zero-emission energy for our City’s use:

We write to request your consideration of the attached resolution that would express the City of Lakewood’s support for three related and mutually-supportive plans to address climate change, a problem that is growing in urgency and which already affects Lakewood in the form of severe storms, higher lake levels, higher temperatures, and changing weather patterns.

At the request of a number of Lakewood residents, we specifically invite your support for the Bluegreen Alliance’s Solidarity for Climate Action plan; for the Green New Deal resolution (H.R. 109); and for the Energy Innovation and Carbon Dividend Act (H.R. 763).

Two of these climate change plans would set priorities and provide a broad policy framework to guide federal, state, and local action, while the third would implement a central strategy (cap-and-dividend) to address climate change. (Summaries of each are included below.) Many additional steps must follow to put these policies in action and attain the goal of mitigating the worst effects of climate change.

Of course, our City cannot act alone to effectively address climate change, which is global in scale. This is why it is especially important that we call upon our state and federal partners to work on this issue in a focused manner.

But we must do our part, and happily, the City of Lakewood has been working for years to improve our energy use, transportation system, storm water management, and many other areas. To name of few, these include: sidewalk repair, increasing bicycling, increasing our urban forest canopy, weatherizing homes and commercial buildings, converting street lights to LED, sourcing clean power for city operations, installing and encouraging solar, adding electrical cogeneration to our wastewater treatment plant, expanding recycling, and keeping Ohio’s densest community a vibrant destination of choice.

Our Community Vision articulates support for sustainability throughout, and the City’s Resiliency Task Force will soon report its analysis on how our City and community can further improve—and prepare for climate change disruptions.

Let’s continue our leadership, which is badly needed in a divisive chapter of American society in which scientific problems have been politicized such that many leaders shirk their responsibilities on climate. Our state and our country need to hear our community’s voice: they need to hear that we are engaging this problem with foresight and responsibility.

The democratic socialist revolution comes to a crossroads – August 5, 2019 CNN

Buddhist Center opens in Lakewood with welcome to all faiths – February 17th, 2018 – Cleveland.com

Yesterday Was a Good Day

Below is a link to the agenda for Tristan Rader’s May 23trd, 2019 Townhall. Event location: Lakewood Library Main Branch @ 6:30PM

On May 20th, 2019 all three Lakewood City Council At-Large Members, Meghan George, Tom Bullock and myself, Tristan Rader, introduce a potential plan to bring up to 1 Megawatt of solar power to many of the municipal buildings in Lakewood.

Lakewood has been given the unique opportunity to partner with Cuyahoga County, and the County’s contractor Enerlogics, to do solar panel installation at no upfront cost to the city. This could reduce our reliance on the grid by as much as 20%, or 1.3 Mw per year, while reducing our energy bills. With this specific proposal, the cost savings to taxpayers could be more than $550,000 over the life of the system. Again, with no capital investment of our own. This is accomplished by working with the County and contracting with a third-party owner/installer to buy the net-metered power we generated on our rooftops, at a reduced rate. Here is the presentation.

After a few years the city will be given the option to purchase the panels if we so choose.

Most importantly, we will be doing our part to contribute to a clean, affordable, and sustainable planet. As, renewable energy provides substantial benefits for our climate, our health, our economy, and community.

This just one option that we would like the city to consider. There are other ways to do municipal solar. We could buy our own solar panels, for instance. We believe it is worth weighing our options but also moving the discussion forward, with purpose.

We are planning to have members of Enerlogics and the County Suitability Department present the proposed plan at an upcoming meeting. Details will be provided once a time and date are set.

With this in mind, my council colleague Meghan George and I are proposing an Access to Public Records policy, to ensure the preservation and public accessibility of records.

Having a chapter of our code dedicated to public records would not make Lakewood unique, nor is it intended to invalidate the city’s current records process by which many in the community have been well served. In fact, an important objective of this proposed legislation is to maintain and reinforce important portions of the city’s current Public Records Policy by codifying them into permanent law. Some of these include:

END_OF_DOCUMENT_TOKEN_TO_BE_REPLACED

Below is a link to the agenda for Tristan Rader’s May 9th, 2019 Townhall. Event location: Lakewood Library Madison Branch @ 6:30PM

We represent the future of elected officials; all of us are elected officials age 40 and under throughout Cuyahoga County. We are concerned about the future of our communities and the entire state of Ohio. As young community leaders, we understand what young families are looking for in their forever community. Ohio loses more college graduates than we gain from other states, which means that we have work to do to keep young educated individuals. As you prepare for the biennial budget, we hope that you take the following into consideration.

You stated throughout your campaign for Governor and since taking office that you want to be a partner who works with local officials to restore the local government fund to a certain level. The Local Government Fund is supposed to return money from Columbus back to the local governments who are the closest to ensuring the needs of the people who live in their respective communities. Ideally, we would like the local government fund restored to the 3.68% of the total amount of state tax revenue credited to the General Revenue Fund that Senate Bill 17 introduced in the 132nd General Assembly called for. However, we understand that the money would have to come from somewhere and we would be more than willing to help create a solution that is good for the state and fair to local governments. The Ohio General Assembly has repeatedly decreased funding and revenue with local governments through phasing out tax reimbursements, estate taxes, and the local government fund. According to Policy Matters Ohio, local governments around the state have lost nearly $1.2 billion (adjusted for inflation) in 2017 when compared to 2010 funding due to these changes. As you know as a former county official, these funds are used for critical services for Ohioans including police, fire, and law enforcement. Furthermore, by allowing levies to adjust for inflation, it would allow for revenue to increase with the increase in expenses due to inflation, resulting in less of a need to ask voters for money. We urgently need funding for our municipalities throughout Ohio to foster safe communities, maintain sound infrastructure, increase economic development, and improve the overall welfare of our state.

Our constituents wonder why there are so many communities having to cut services. They wonder why local leaders have to put more levies, bond issues, and other financial measures on the ballot in recent years. They wonder why the highways, roads, bridges, and infrastructure are falling apart in our state. Both of these are because local governments are not getting the funding they desperately need to address these important issues in our communities.

Finally, Ohio needs to prepare for the future, including investing in broadband and technology and renewable energy sources. Our state needs to remain competitive for businesses and individuals/families to want to move to and remain in Ohio. Connection through broadband is a way of the future, and Ohio should be ahead of the game when it comes to bringing this technology to cities, urban, suburban and rural. Investing in renewable energy through partnerships will be beneficial to long-term costs of energy and the environment. Innovative projects, like the solar farm that was built on a landfill in Brooklyn, are just the start of what Ohio can achieve to further our renewable energy state-wide.

We want to work together with you as our Governor and leadership in the Ohio General Assembly in hopes to address state funding in a bipartisan effort that will benefit all communities throughout Ohio.

Ongoing communication is the most important part of representing Lakewood on city council. So let’s talk at a town hall meeting—I have scheduled three town halls for this spring.

If you aren’t quite sure what to expect, it’s very simple: members of the community have a conversation, with a member of city council participating. Bring questions, ideas, concerns, problems or solutions.

Hope you can be part of the conversation!