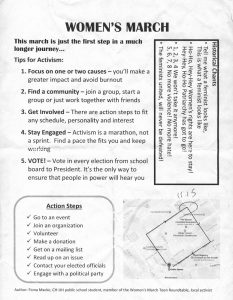 I know that Lakewood had a big presence at the Women’s March, both locally and in Washington. Many people have gotten involved and stayed engaged since. None of these tasks are finished, either; “activism is a marathon not a sprint.” But for those in Lakewood who took part in or inspiration from the Women’s March, “vote in every election” has remained in the in-tray all year awaiting an opportunity.

That opportunity is going on now (with postal and early voting), and it continues for 10 more days.